Last month, Adam and I drove up to Vail for a long weekend to celebrate my birthday and our 3 month anniversary. We stayed at the hotel where we stayed for our wedding, the Vail Cascade. We had dinner in the hotel restaurant and I ordered the pork shank with tomato and white bean ragout--it was unbelievably fabulous. The beans were silky and creamy and rich and the braised pork was just insane. One of the best things I've ordered in a restaurant in a really long time.

So I had to recreate it! Yesterday I went for a long run and worked out the recipe in my head. I used lamb shanks instead of pork shanks--I've never seen pork shanks for sale anywhere, and I had lamb shanks in the freezer. Plus, I had the last of the garden's tomatoes that needed to be used up.
This recipe is a fair amount of work but so, so worth it. These were absolutely perfect. 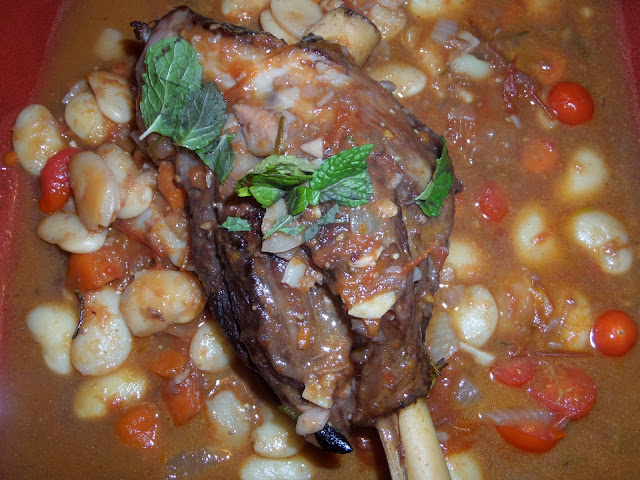 For the shanks
4 lamb shanks, about a pound each
olive oil
salt
3 shallots, diced
2 carrots, diced
7 cloves of garlic, minced
2/3 a bottle of red wine (no need to go fancy. I used the bottle that was on sale for $4.99 at Santa Fe liquors--our local shop specialized in $1 pocket shots and flavored blunts)
2 cups plus 1 cup chopped tomatoes
2 sprigs rosemary
2 bay leaves

Start by soaking the beans. Cover the beans with cool water and set aside.
Preheat the oven to 325 degrees.
Salt the shanks. 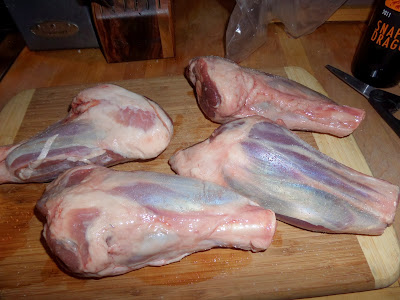 Heat 3 tablespoons of olive oil in the bottom of a large, heavy pot with a lid. The burner should be on high. Brown the shanks thoroughly in the oil, about 5 minutes per side. Work in batches--the shanks should not be touching. Place shanks on a plate and and set aside.
Lower heat to medium. Add the carrot and shallot to the leftover oil and rendered lamb fat. Saute for a few minutes, then add the garlic. Cook for a minute more.
Add the wine. Bring to a boil and cook for 5-10 minutes until reduced by about a third.
Add the 2 cups tomatoes and cook for another 4 minutes. 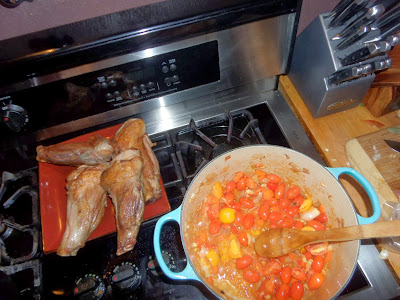 Add the shanks back into the pot and nestle into the sauce. The sauce should just cover the lamb--if there isn't enough sauce, add some water or stock until shanks are barely covered. Cover the pot and place in the oven. Cook at 325 for two hours.

Meanwhile, make the beans.
Melt the butter in the bottom of a pot. Add the onions and garlic and a big dash of salt. Cook for a few minutes, then fill the pot with water. Add the slice of bacon (whole is fine) and bay leaves. Bring to a boil.
Add the beans and reduce heat.
Simmer, uncovered, for about 40 minutes. Beans should be tender but not mushy. It's ok if they're slightly undercooked--you will cook them again when you put them into the ragout sauce. When they're done, remove from heat and wait till it's time to add them to the lamb.

When the lamb has been braising for two hours, remove the shanks from the sauce using tongs. Place shanks onto a cookie sheet or other oven-safe tray.
Put the pot of sauce back on the burner and bring to a boil. Reduce the sauce for about 20 minutes. Drain the beans. Remove the bacon and bay leaves and add the beans to the pot of reducing sauce.
Add the remaining cup of chopped tomatoes.
Cook the sauce for about 5 more minutes.
The sauce should now be rich and thick and amazing. Taste for salt.
While the sauce is reducing, crank your oven up to broil and put the shanks back in for about 3 minutes, turn them, and cook for 3 more minutes. You want them to get a nice brown sear and crisp some of the other fat. (This step set my smoke alarm off about 3 times).

Turn the heat off under the sauce and add the shanks back in, turning to coat in the sauce.

Serve by scooping a ladle of beans and sauce onto a plate, then adding a shank on top, then drippling some extra sauce over the shank. Scatter with chopper mint and a few drops of fresh lemon juice. 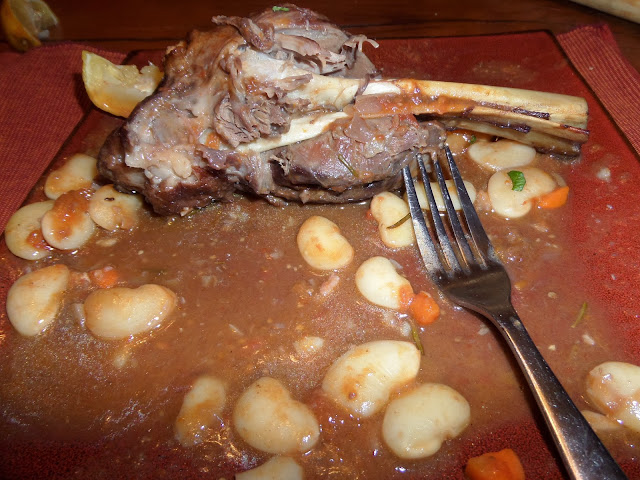 This was just fabulous.
Enjoy!
Posted by Unknown at 2:09 PM