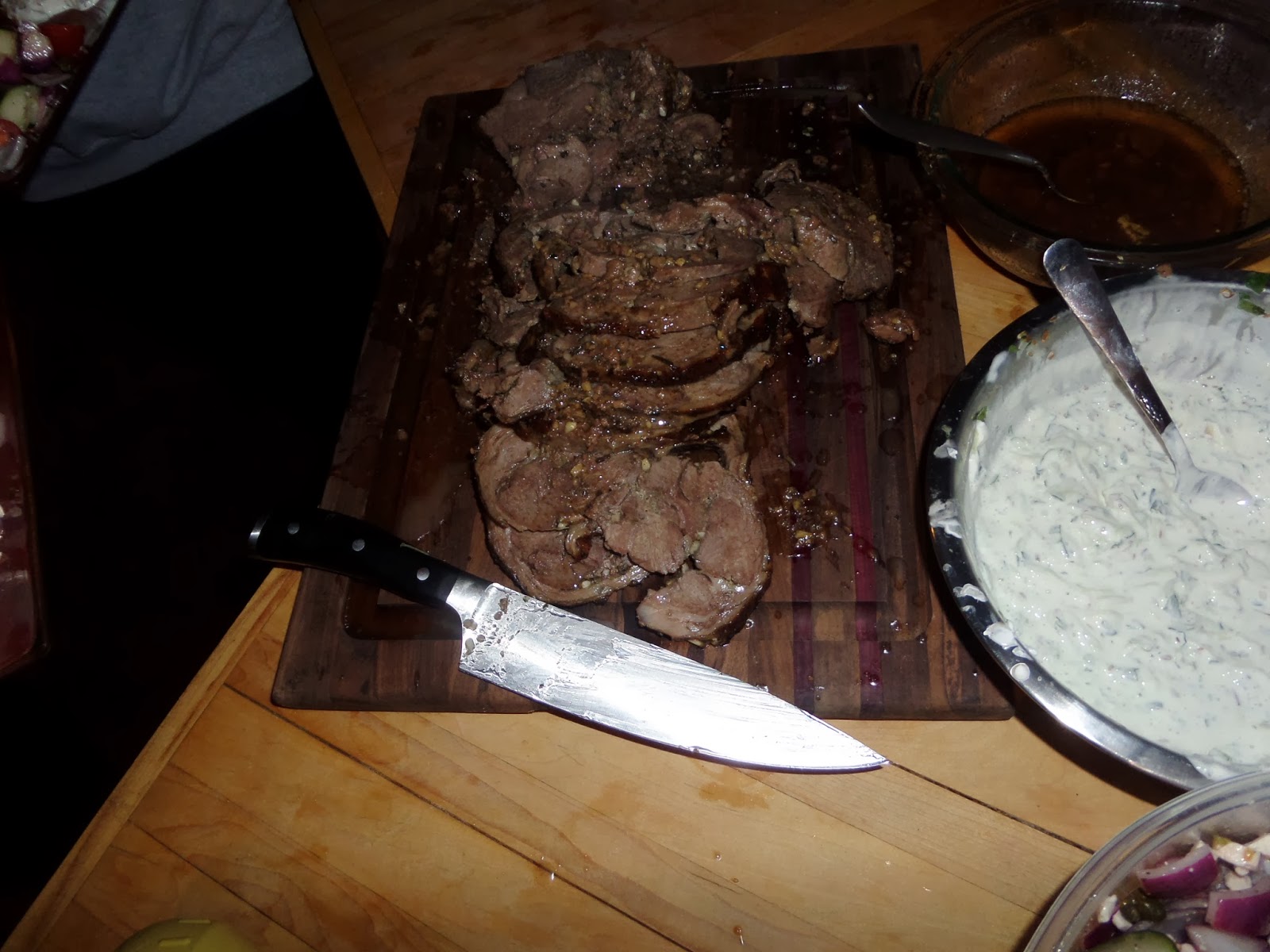 This fantastic combination of tender, flavorful lamb, refreshing raita, crisp, fresh salad and warm homemade flat bread isn't an easy weeknight dinner. It should be saved for a special occasion, and only undertaken if you're the kind of person who loves the process of cooking nearly as much as you adore the pleasure of eating at home.

In retrospect, I ought to have left this for a Sunday, but it was a really special occasion--the finale of The Bachelor! For the last couple years, some coworkers and my sister and I have gathered every Tuesday to mock the worst television event in America, drink wine and hang out. This is a great opportunity for me to practice my favorite pastime--cooking for a crowd.
Right after Christmas, I was in the grocery store and saw enormous legs of American lamb, reduced to scandalously low prices. A 13-lb leg was a mere sixteen dollars (the last, smaller one I bought was $80, albeit from Oliver's, who sells high-quality local meat). I couldn't pass up the bargain--I bought it and waited for an special occasion like the finale of a TV show that is everything wrong with America.
I decided to do a boneless, braised / slow roasted preparation for a couple of reasons. Firstly, the bone-in leg wouldn't fit into my biggest roasting pot. Secondly, even though I usually prefer a medium-rare preparation on any lamb (such as here), this lamb had dark-red flesh and was unusually large, so my guess was this was an older lamb. It's meat would be distinctly gamy. Having been frozen for months wouldn't help the flavor and texture, either. So braising in wine would tenderize the meat, and smearing the roast with copious garlic, rosemary and lemon zest would counteract the gaminess.
Seeing as the lamb came on the bone, my first step was to butterfly it--myself. I watched a few youtube videos, then started hacking away.
I based the rest of general cooking background knowledge and how I personally like lamb to taste. I didn't follow a recipe, so this post doesn't read like one.
Then, I chopped a head and a half of garlic, four sprigs of rosemary, the zest of two lemons, and some salt and black pepper.

Then, I rubbed half of this onto the inside of the leg, then rolled it up, and rubbed the other half onto the outside. 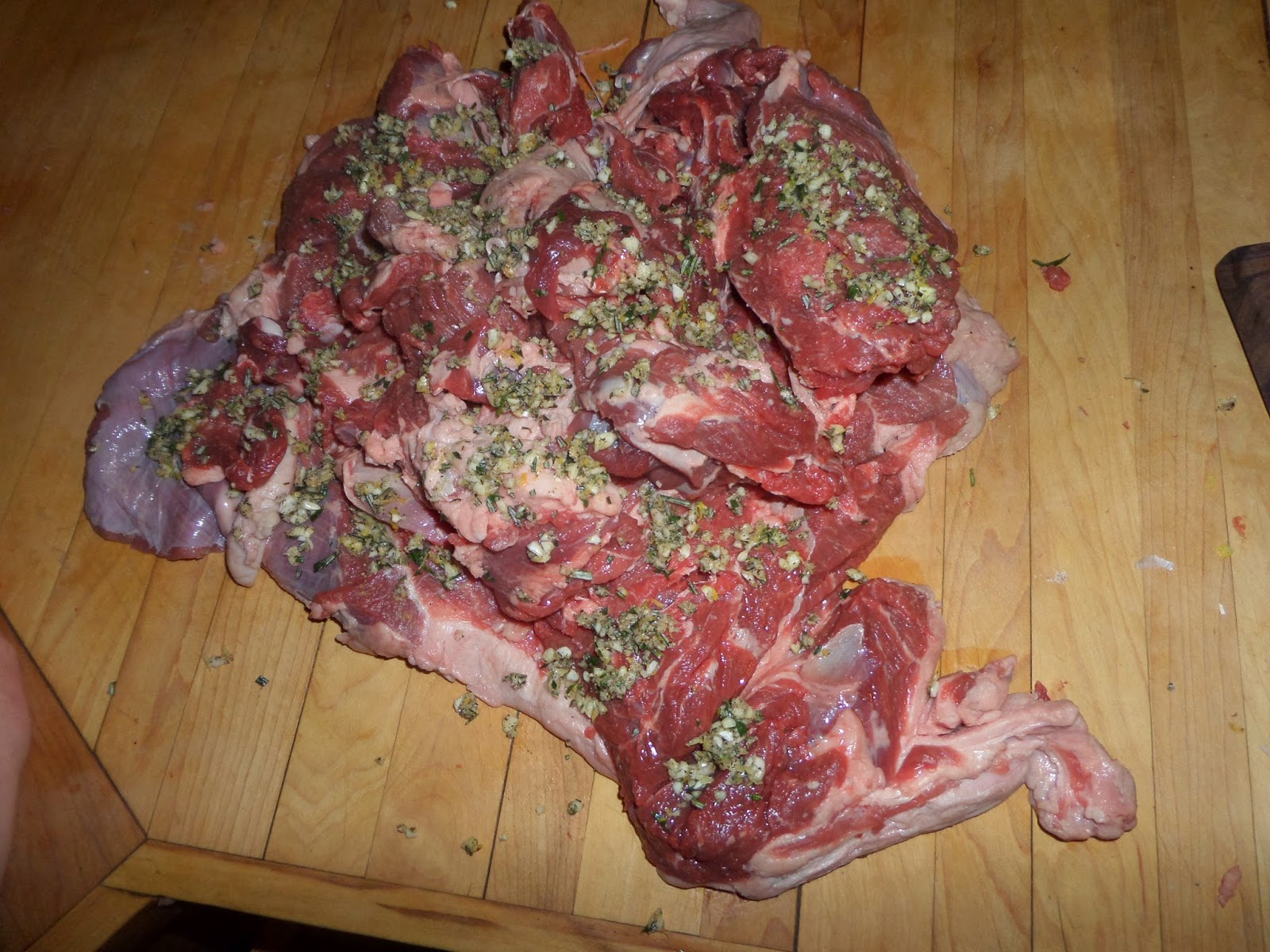 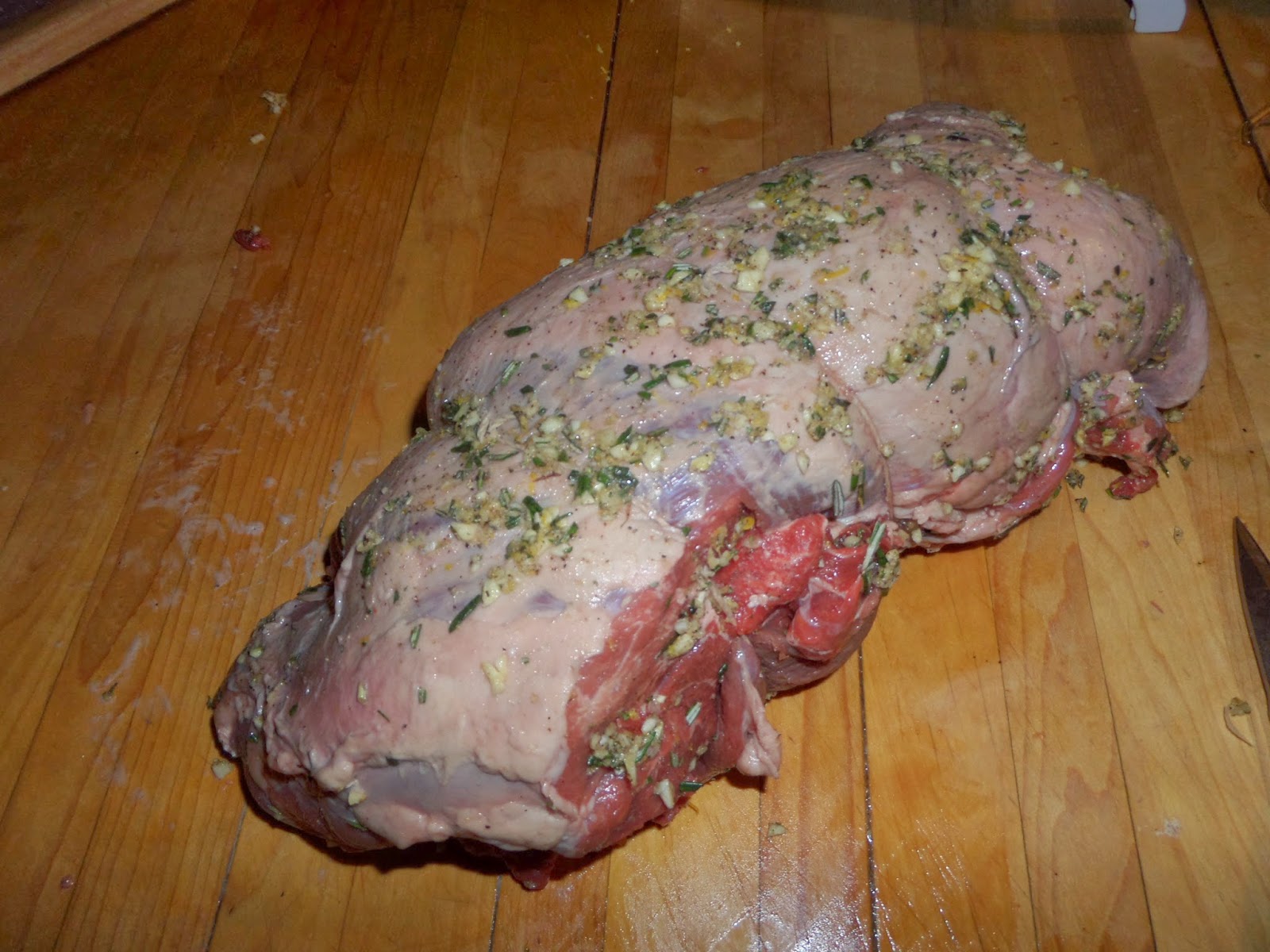 Then, I placed this into my dutch oven, poured half a bottle of chardonnay around the outside, and covered it. I cooked it at 225 degrees for six hours.
Then, I removed it, cranked the heat up to 550, and blasted it for about 10 minutes to get a crisp, bronze finish on the outer layer of fat.
I then allowed the lamb to rest for 25 minutes. During that time, I took all the liquid that had accumulated in the pot while the lamb was cooking. I skimmed as much fat off the top as I could (there was quite a bit--lambs are fatty), then I pour the liquid into a sauce pan, put it over the gas, and let it boil and boil to reduce.
I spooned a bit of the reduction over the resting lamb to make it glossy and juicy-looking, then put it in a bowl for people to spoon over their meat as they served themselves. 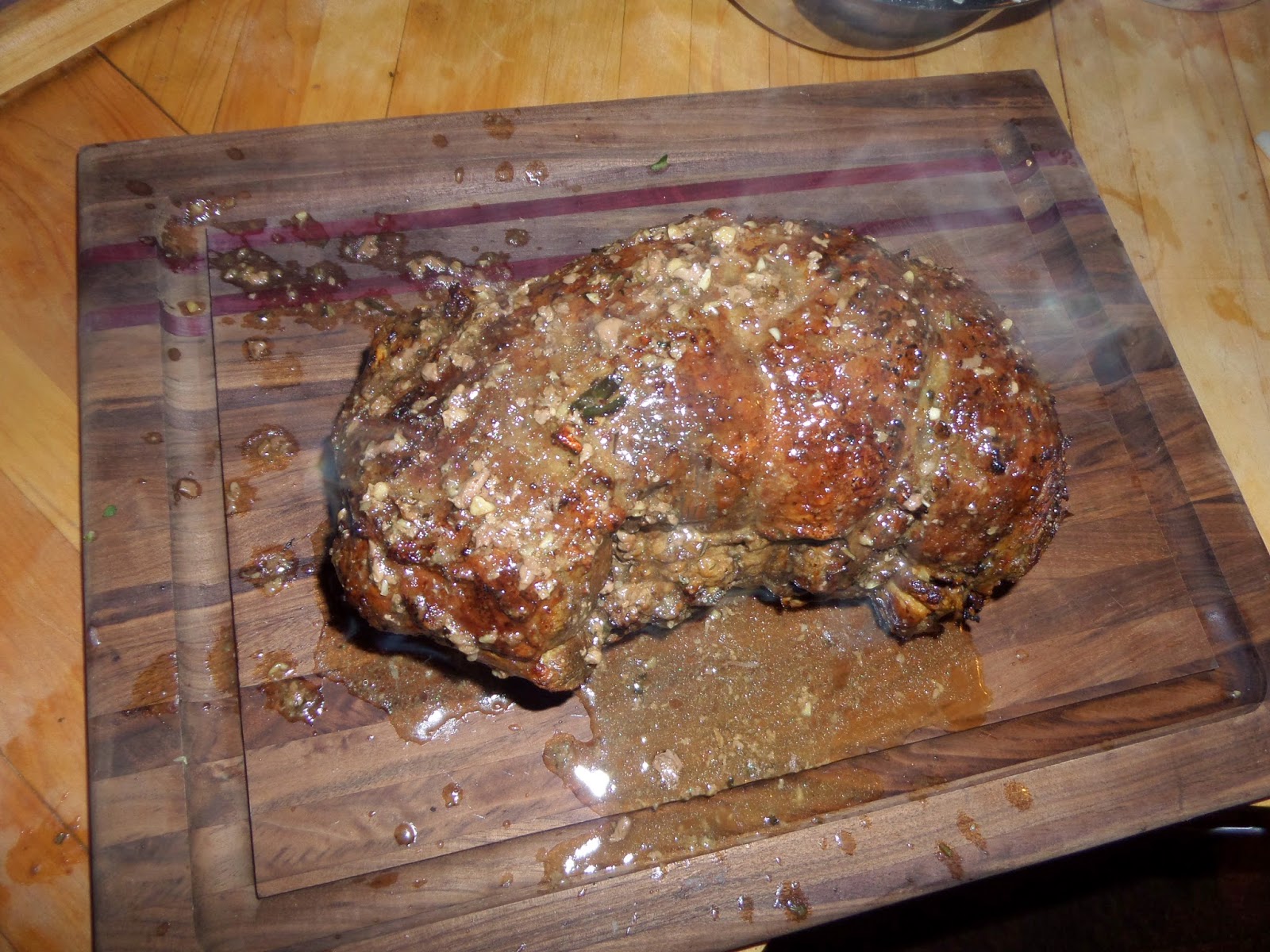 To go with this, I made whole-wheat flatbreads (I cooked on our cast-iron, stovetop grill), cucumber mint raita, and Greek salad.

To make the Greek salad, I combined two clamshells of little red grape tomatoes (the only tomatoes that tasted good this time of year), two cucumbers chopped into rough chunks, two chopped red onions, a quarter cup of drained capers, a few tablespoons red wine vinegar, and a quarter-ish cup of olive oil, some black pepper, then mixed everything together.
This was a FABULOUS DINNER 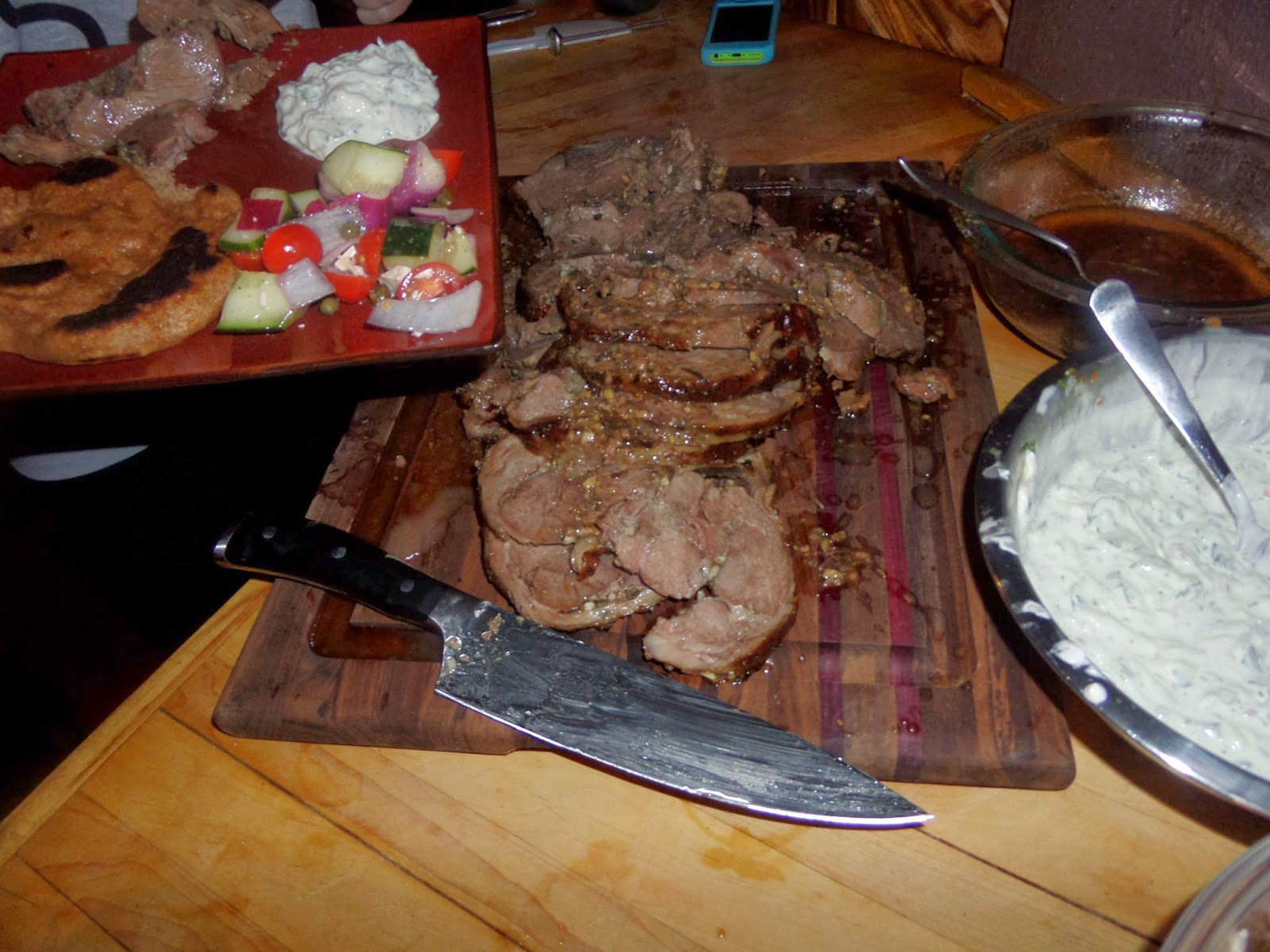 Soon it will be Easter, and soon after that, you too can find a discount leg of lamb in your neighborhood Albertson's or Safeway's. I cannot recommend this "recipe" enough--it is fantastic.
Enjoy!