I haven't been posting many recipes lately. Perhaps out of embarrassment out of the sheer, shameless gluttony of what I've mostly been making.
In the last two weeks, I've hosted a couple of events in our backyard, both of which I used as an excuse to make gigantic, spectacular meats and a ton of sides. One was a party ("I Did A Dime") I threw for myself to celebrate my tenth year in the classroom, and the other was my school's end-of-year party.

For the ten-year party, I made BBQ Brisket in the smoker, which I dry rubbed then smoked for 14 hours at 190 degrees. I also made glazed pork shoulders, picked red onion and fennel, German potato salad, and Greek tomato salad. 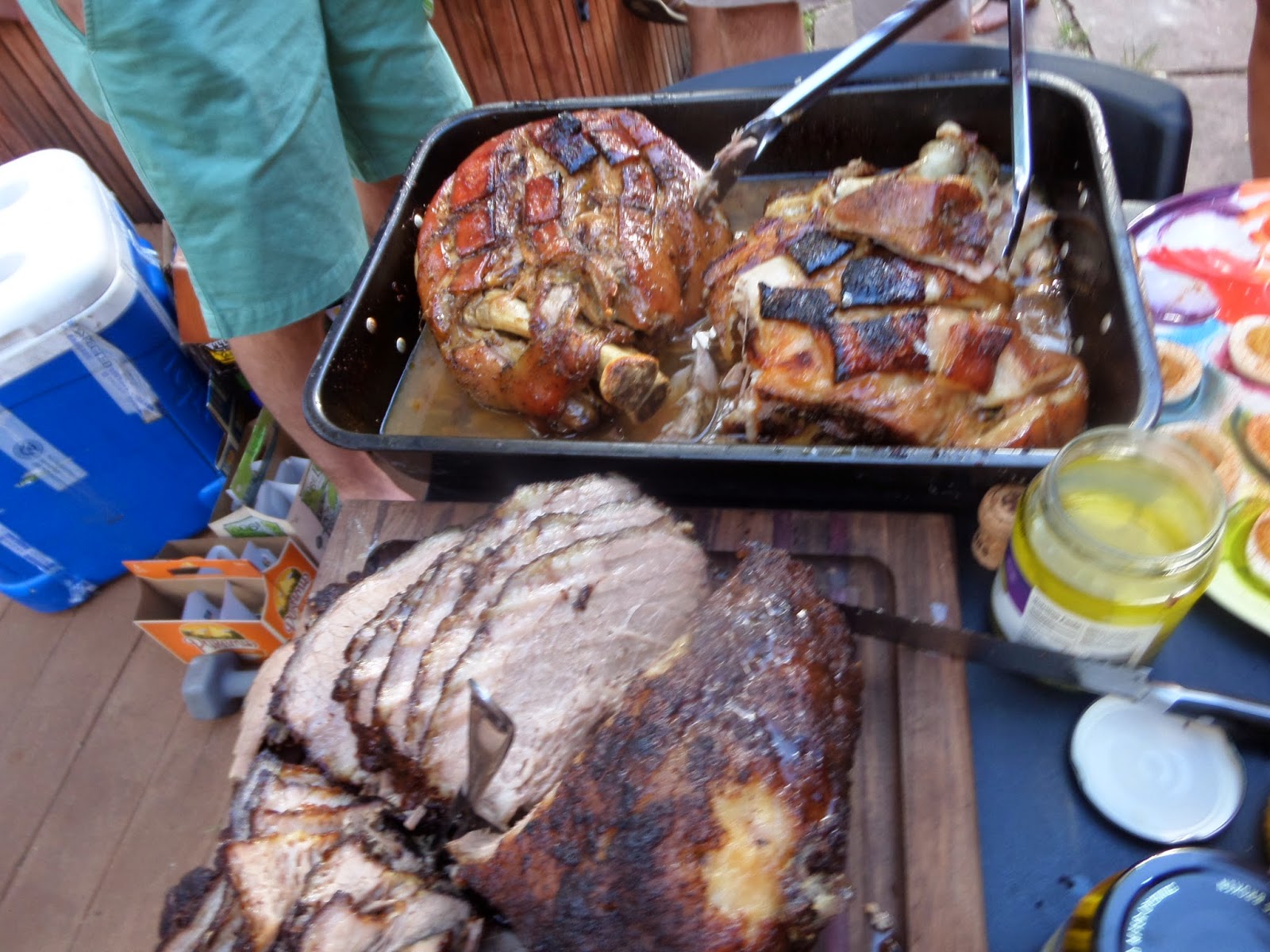 I had white bread, BBQ sauce and sweet pickles to go with the brisket.
Everything was inhaled. This BBQ also featured my most genius innovation this year--using home brewing equipment to carbonate boxed Franzia into world's worst "champagne". An entire 5-gallon keg of this was drunk before 9 pm.
Also notable was the quality of the brisket. I've been practicing and tweaking my technique since we got the smoker two years ago, and this was the best version to date. What I've learned boils down to basically just being super anal about controlling the temperature. Watch it like a hawk and keep it steady and low (190-205) for the first seven hours, then at about 225 for the next five. Never let it get too hot for too long.
So then, for the end-of-year school party, I decided to go all-Asian, as certain members of our staff claim fashionable food intolerances. Last year when I hosted, I played it safe. I made chicken piccata, roasted root vegetables with goat cheese and balsamic, walnut pesto pasta salad, tomato salad, and  ordered some cupcakes. It was good, but didn't really scream OH MY FUCKING GOD I AM SO GLAD THE YEAR IS OVER. It was too subdued, healthy, tame, and virtuous. Charter school teachers suffer from an overabundance of personality-crippling virtue, as it is. This year I went way more dirty.
I made Bo Ssam, which I have been wanting to make for at least a year.
Bo Ssam is a Korean roast pork that all the food blogs on the internet have been obsessing over for the past year. The recipe I used is here.

It was INSANE. I also made the scallion sauce and ssam sauce.
I also made a red-cooked, Szechuan pork belly, because why not? It was an experiment, and I wanted to push my kale-loving coworkers out of their comfort zones. Also, I had a tub of Szechuan pepper corns I'd bought forever ago and hadn't used yet.
To go with this, I also made some chile-soy marinated chicken skewers for the pork-rejecters in our midst And my classic peanut sauce.

In addition, I made a Vietnamese noodle-and-herb salad with nuam choc dressing, stir-fried veggies, and a big pot of sticky rice.
So all in all, the summer is off to a fantastic start. Looking forward to cooking, relaxing, reading, and recouperating from year 10 in the classroom.

Will get some of these recipes up as soon as possible!