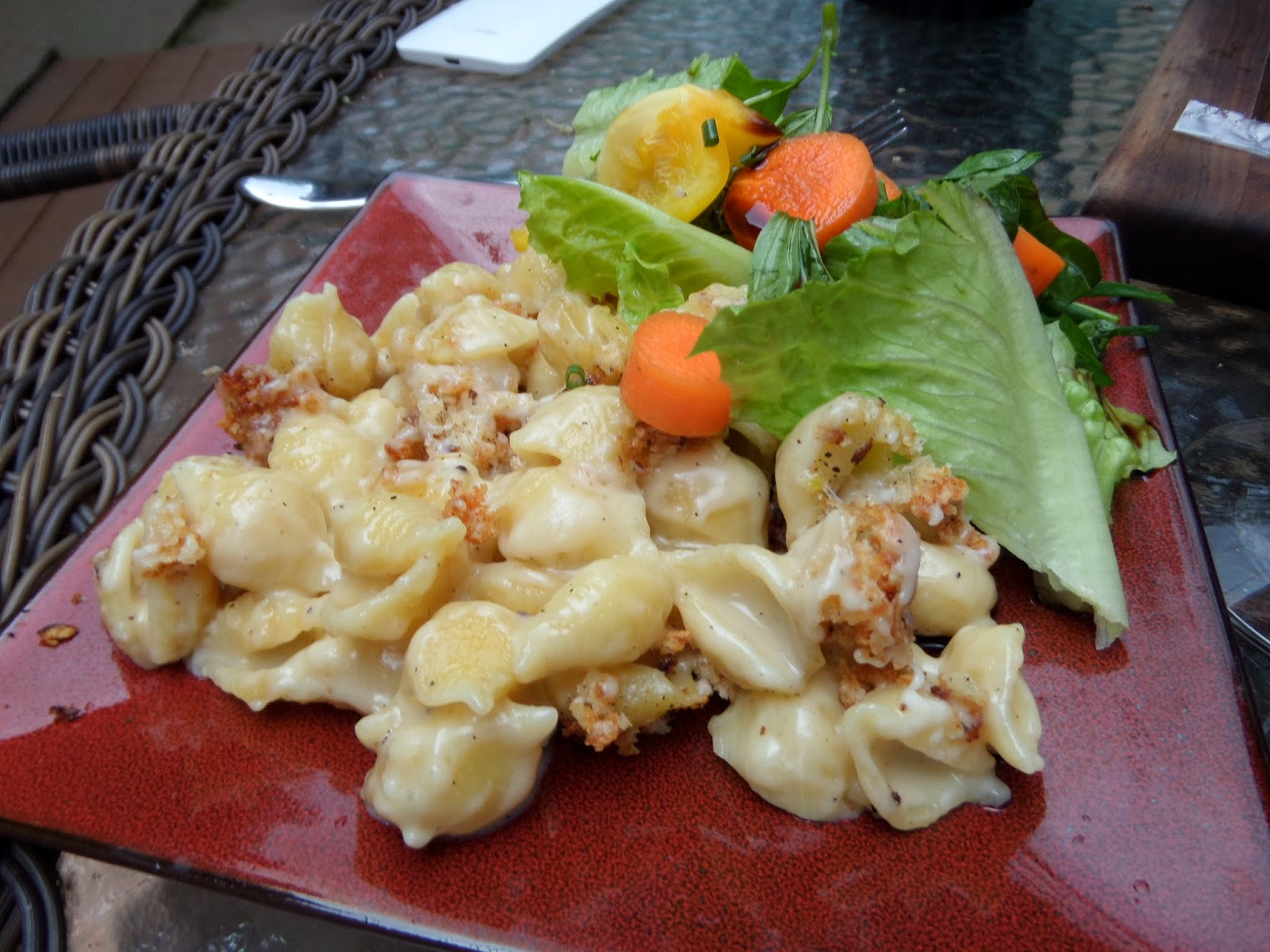 I've been thinking obsessively about mac and cheese ever since I had the best version known to man at Caseus in New Haven. Their version lists the component cheeses:

I have never had raclette or comte in my life. And what on earth is Der Sharfer Maxx??? Sounds like a bad-ass biker cheese.
I set about trying to recreate this insanely mind-blowing food experience, but with the cheese offerings of my local Alberston's:
I ended up using fontina, gouda, gruyere, and my all-time favorite, extra-sharp aged white cheddar from Cracker Barrel.
This was the first time I've made mac and cheese at home. Why? Well, a small part of the reason is that my husband is lactose intolerant: the price of a dairy-heavy dinner is being hot-boxed all night by noxious, unrelenting ass.
But really, the main reason I haven't even though to make mad and cheese is that it's a food associated with the worst eaters in humanity: American children. You think mac and cheese, you think a picky four year old who only eats mac and cheese, chicken nuggets, fries and apple sauce. You think dinosaur-shaped pastas drowning in neon hell sludge. You think of children's menus.  (why the fuck are children's menus even a thing? Can a child in a restaurant not simply eat a smaller amount of gnocchi or risotto or lamb chops? Why do we send children the message that hot dogs and grilled cheese are specifically their food? Why lead them down a fake-cheese and chicken-finger paved road to impacted bowels, obesity, culinary philistinism and a lifetime of microwaving Swanson's freezer bags of failure?)
The culturally accepted food of American children is foul, beige, processed, bland bullshit, and as a rule I want nothing to do with it.
My house, kitchen and life away from work are adult-only spheres: rare meat, dark green salads, anchovy vinaigrette, noodles with chiles and fish sauce, gorgonzola, strong homebrew, Scotch, large travel expenditures, 11 am weekend wake-ups, homemade hot pickles, The Wire, casual nudity, and multi-day cooking projects.
I'm sure if we ever actually produce a small human, it will automatically pop out enjoying stouts, short ribs and braised cabbage and I won't have to change my habits at all.
Anyway--the mac and cheese at Caseus changed my whole mac-and-cheese paradigm. As I shared a bottle of wine and dug in I realized: mac and cheese is legit amazing, in certain forms. And! Perhaps mac and cheese can be a suitable adult foodstuff! My mind was blown. 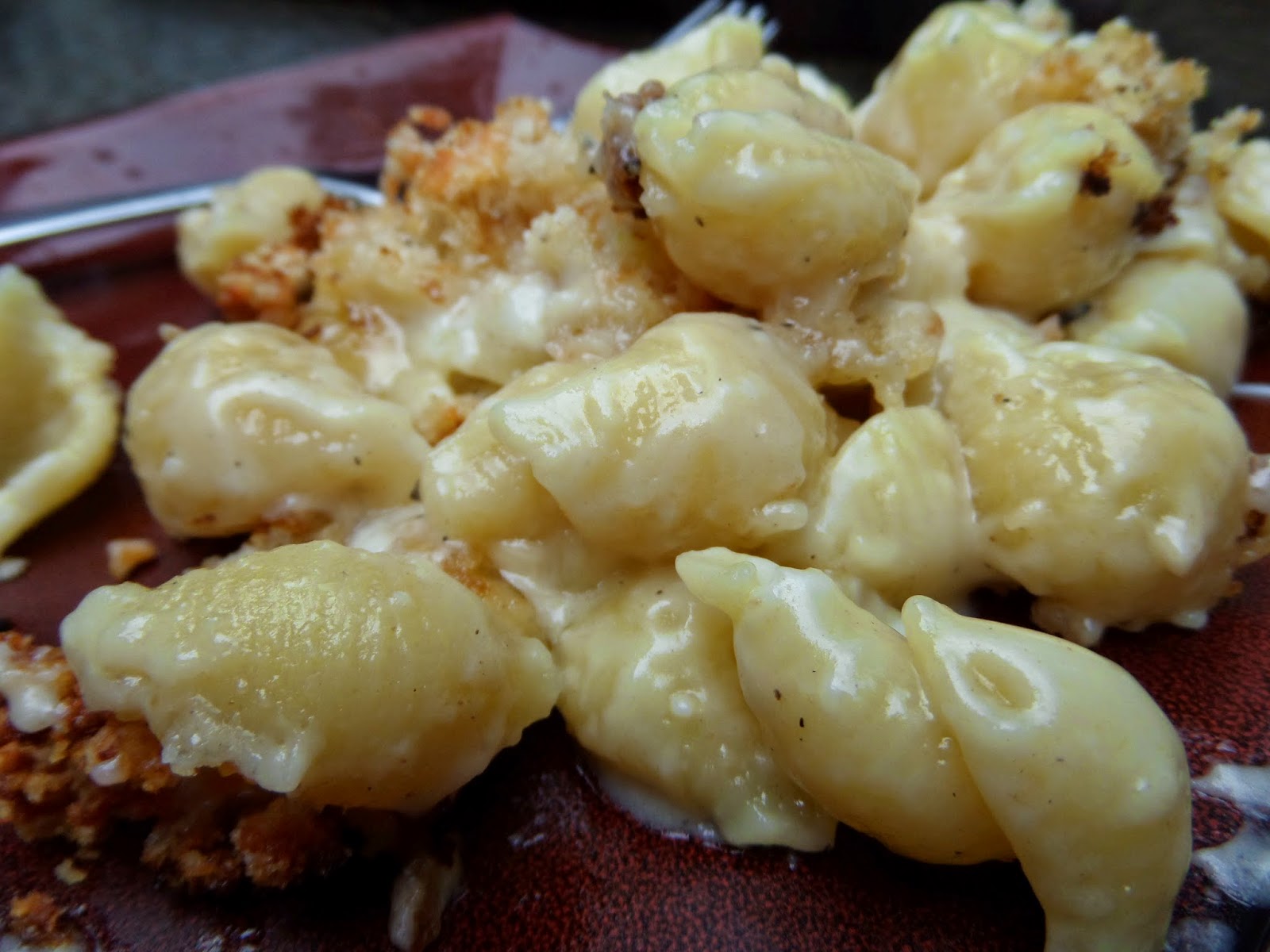 My version didn't really compare to Caseus. But it was still super bomb. I served it for the monthly meeting of my cookbook club. Only three members of the club could attend this meeting, including Consuela.

Boil some salted water for the pasta. Cook the pasta for 2-3 minutes less than the cooking time on the bag / box calls for, as you will also be baking it, and you don't want it to get mushy.
Grease a casserole. Preheat the oven to 350.
Melt the butter in the bottom of a large pot. When it's completely melted, add the flour and stir constantly, allowing the flour to become caramel brown, about 3-4 minutes. You made a nice roux! Add the mustard powder, about a tablespoon of the minced garlic, and a big pinch of black pepper. Stir for another 30 seconds to fry your spices, then add the quart of milk.
Whisk the milk mixture until it steams up, just on the edge of boiling. Then, add all the shredded cheese and whisk like crazy. Keep the pot on the heat, whisking, until the sauce is smooth and hot, just on the edge of boiling.

Add the cooked pasta. Mix the pasta into the sauce, then pour into the greased casserole. It's ok if it looks a bit soupy at this point--as you bake it, a lot of the liquid will be soaked up by the pasta, and some sauciness will only enhance the luxury of the final product.
Add the bread crumbs to a dry saute pan. Add the remaining garlic and the parmesan. Toss over a flame until golden and crunchy, then scatter evenly over the top of the casserole full of pasta and cheese sauce.
Bake at 350 for about half an hour--until cheese is bubbling and the top is golden.
Serve with a side salad. 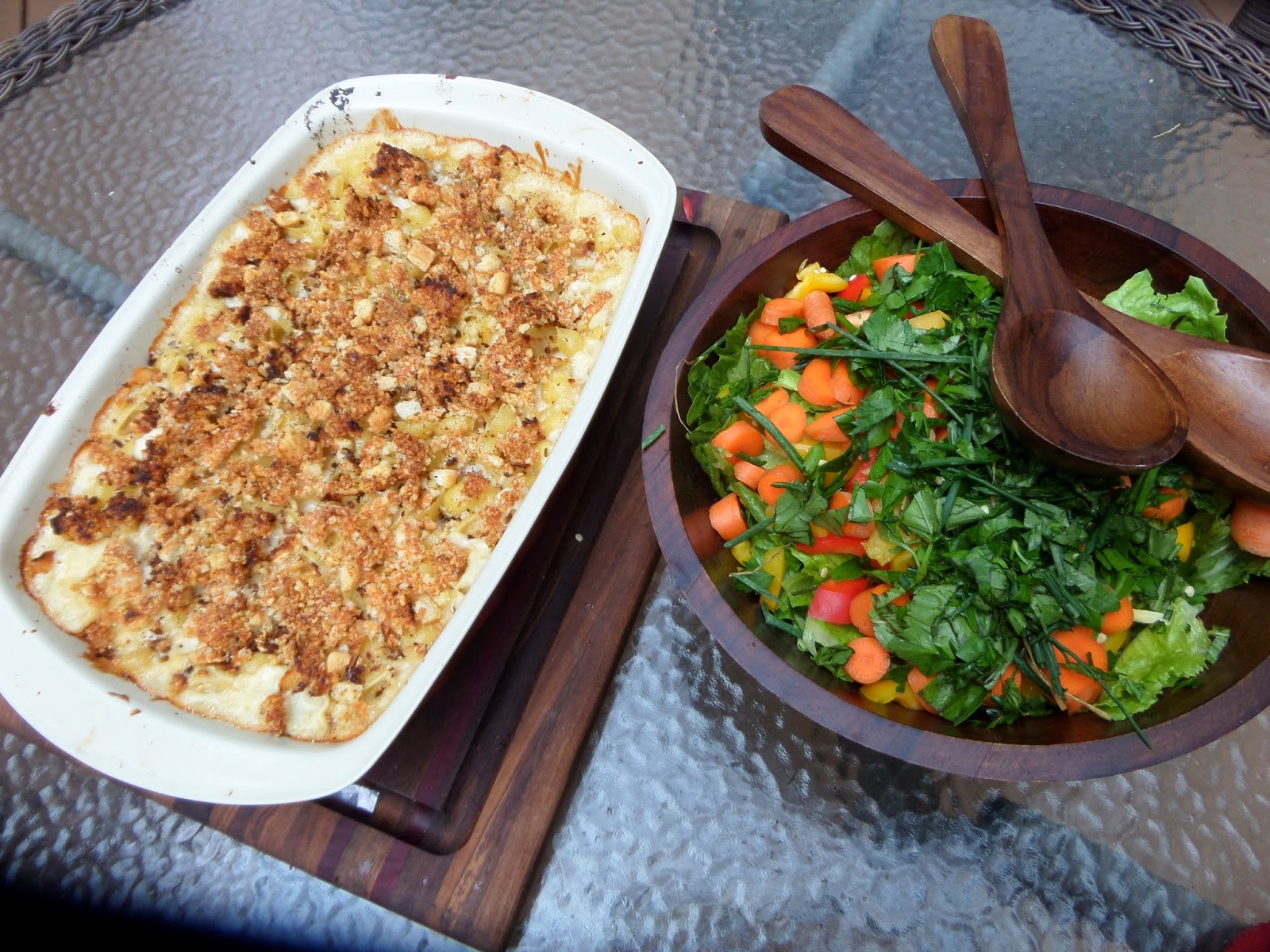 This was delicious. But I feel I could improve it even more--maybe using smoked gouda and adding some chevre to the sauce? Maybe toasting the bread crumbs in truffle oil? The possibilities are endless.
Enjoy!

Email ThisBlogThis!Share to TwitterShare to FacebookShare to Pinterest
Labels: cheese, pasta, why the fuck are there children's menus?