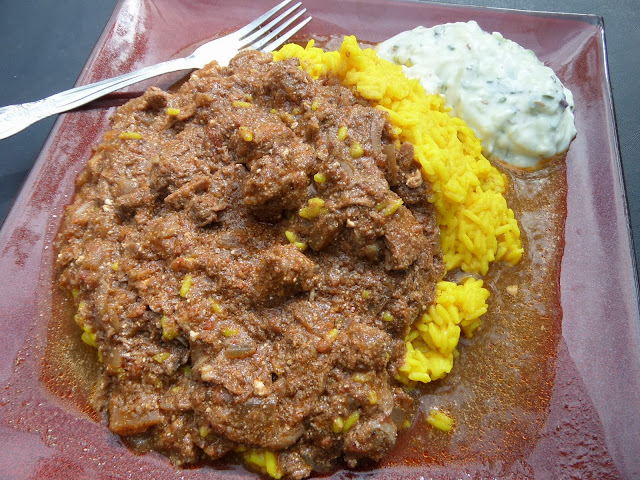 To be fair, I've never made a lamb dish that wasn't fabulous. I've made leg of lamb, lamb ragu, lamb chops, and 6-hour lamb shoulder: all of these were to die.
And so was this fantastic lamb korma! The spice combination tasted warm and complex, while not overwhelming the rich gaminess of the lamb. It was simply delicious--better than any version I've ordered in a restaurant.
I made this dish for an Indian dinner party, along with chicken tikka masala and fiery veggie masala with cucumber-mint raita. I also made a cardamon-orange-vanilla rice pudding for dessert.
People came over and we ate in the backyard--it was a really fun night, and the Food. Was. Amazing. It was exactly my idea of a great Saturday night.
I invited my English department to the party--and several of them can't eat gluten, which is how I struck upon the idea of having an Indian food party--it's all naturally gluten-free.
I bought my lamb at Oliver's, which is the only place I ever buy lamb and my favorite butcher's shop of all time.
Finding a Lamb Korma recipe online isn't easy--and each one I found had a slightly different combination of spices--some included chile powder, others bay leaves; some included poppy seeds or raisins, one had almond powder. But all of them started with sauteed onions, tons of spices, ginger and garlic, tomatoes, and yogurt--the lamb is then braised slowly in this sauce. Most call for whole spices to be ground in a mortar--I skipped this and just used regular ground spices for the sake of simplicity. My recipe is an amalgam of several I read.

Melt the butter in the pan you'll be cooking in. You should use a deep pan with a well-fitting lid that can go in the oven. Add the onions and saute for about five minutes. Add all of the spices--cloves, pepper, cinnamon, cumin, coriander, tumeric, paprika. Basically throw in anything powdered.
Stir the spiced around, allowing the to fry just a bit in the butter for about a minute. Then add the ginger and garlic and stir that around, too.
Add the blended tomatoes and allow everything to come to a boil. Scrap the bottom of the pot, getting up any spices which may have stuck. Add the sugar and a dash of salt and stir in.
Add the lamb and yogurt. It's fine to put the lam in raw (I was worried about not searing before braising, but it turned out totally fine). Stir around until the yogurt is well mixed in. Add about a cup of water if it looks too dry for a good braise.
Cover the pot and place into the oven at 280 degree for 3 hours or more.
Before serving, skim as much of the fat off of the top as you can.
Taste for salt and serve with rice!