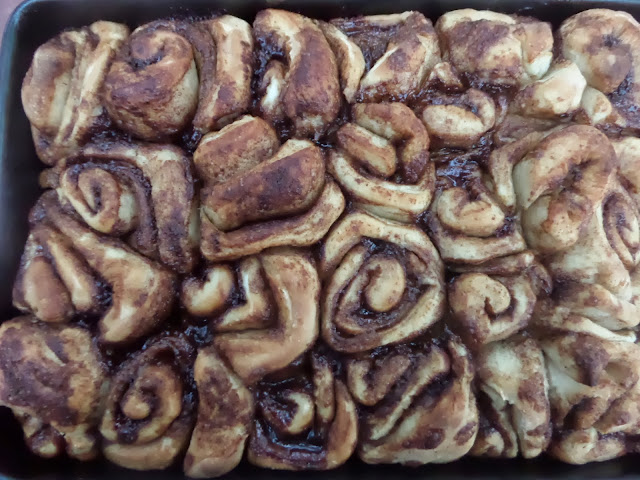 I used my beer-yeast starter for these cinnamon rolls--the bread has a more savory, tangy taste than a traditional cinnamon roll. I like the contrast between the sourdough and the cinnamon caramel filling. 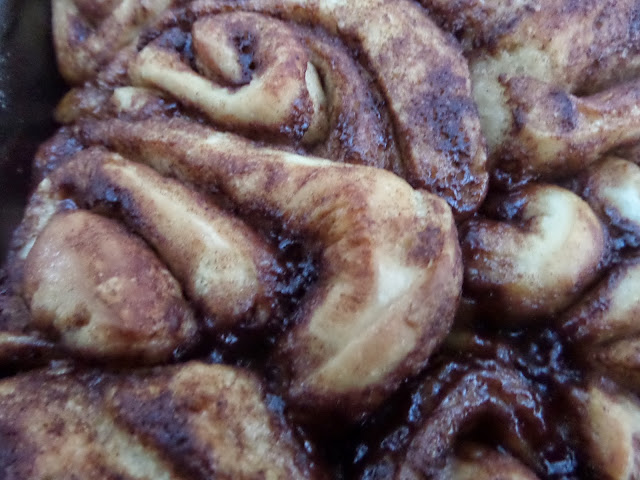 This exact recipe is hard to recreate if you don't have a bucket of starter fermenting in your kitchen (and I can't think of anyone else who does). It's also fine to use a packet of regular powdered yeast. (Here is a great regular cinnamon roll recipe).

What to do:
Combine the buttermilk, water, white sugar, and sourdough starter in the bowl of a standing mixer. Allow to sit for 20 minutes (this will "wake up" the starter, get it hungry and active).
Using the dough hook attachment, gradually add in flour while mixing. Probably you will end up using six-ish cups, but what you are looking for is a cohesive ball, pliant and not too sticky, and moist enough not to have extra flour hanging out in the bowl. Mess with the moisture and flour until you have the right consistency.
Cover the dough and allow it to rise. If using starter, this will take awhile. Leave for five hours or overnight (I actually left mine for like 12 hours and it was fine).
On a lightly floured surface, roll the dough out into a long, flat rectangle.
Combine the butter, brown sugar, and cinnamon in a saucepan.Turn the flame on and whisk together until bubbling (about 8 min). Turn the heat off. Whisk in the vanilla.
Ladle the warm cinnamon caramel over the rolled-out bread. Spread out so every surface is covered. If you have some left over that's fine.
Roll the bread hot-dog style into a long roll.
Cut the roll into little circles at 1.5 inch intervals. Place these into the greased baking pan. Nestle them together.
Pour any leftover cinnamon caramel over the top.
Allow to rise for 2 more hours.
Bake at 350 degrees for about 50 minutes, or until golden brown, puffy, and cooked through.
These were fabulous, and they made the house smell like fatty heaven. I feel like this lager-starter is my bread-baking breakthrough of the year, and I can't wait to make all kinds of other carby awesomeness with it.
Enjoy!
Posted by Unknown at 6:28 PM