This recipe is fantastic--spicy and comforting, rich-tasting while actually being moderately healthy (what's a a little bacon when there are so many other vegetables?) It's like a less-creamy, more-tomato heavy, spicier etouffee. I made this on a Sunday--the stew needs to simmer a reduce for a couple hours, so it's the sort of thing to make on a day when you'll be putzing around the house anyway.
Also--I think serving this over grits results in a more-delicious shrimp and grits than the traditional recipe, which includes a lot of cheddar cheese and Worcestershire sauce.

Ingredients (in order of addition to the pot)
For the shrimp stock
the shells of the shrimp (2 or 3 lbs)
1 tablespoon butter
1 yellow onion, cut in half
the stems of the parsley (you'll use the leaves to finish the stew)
the root ends of the scallions
1 head of garlic, cut in half 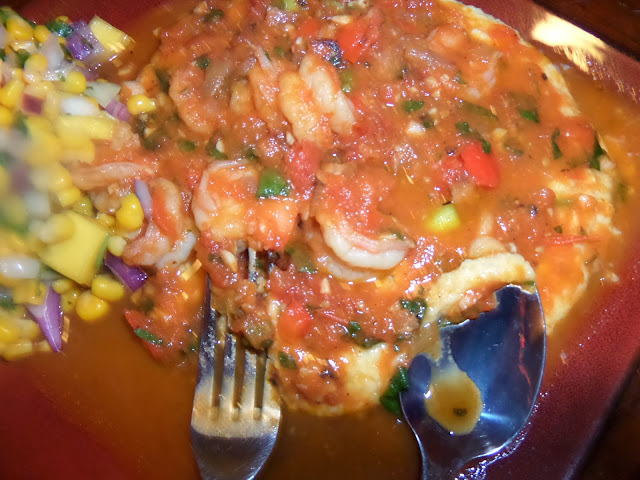 What to do
Start by making the shrimp stock, as it needs to simmer for awhile to develop flavor. In a medium sized saucepan, melt a tablespoon of butter. Add the shrimp shells and a sprinle of salt and saute in the butter--you'll see the shells turn pink. Cover with about 4 cups of water and add the onion, garlic, parsley and scallion ends. Bring to a boil, then allow to simmer for at least an hour.
When it's time to use it, you'll pour it through a colander so the liquid enters the stew and the vegetables and shrimp stay out (just throw these away).

When the stock has been going for 45 min or so, you can start making the stew!
Dice the bacon and add it to your stew pot, along with the two tablespoons of butter. Allow to crisp up and render.
After the bacon's crispy, add the diced red onion and garlic and saute in the butter and bacon fat, stirring regularly, for about 5 minutes.
Add the white wine. Stir, getting up any bits burned onto the bottom of the pot. Boil until well reduced (there should be a thickened liquid on the bottom of the pot).
Add the tomatoes and habanero. Cover the pot until everything boils. Add the shrimp stock and stir. Use a potato masher to smash the tomatoes--you want them chunky and stew-y but not pureed.
Allow this pot to simmer for about two hours, uncovered. Stir occasionally to make sure nothing's burning to the bottom. It should thicken up and reduce while it simmers.
After two hours, add the red peppers and shrimp. Allow to simmer for ten more minutes--the shrimp should stay tender. Adding the red peppers late will allow them to keep their flavor. Taste for salt.
To finish, remove the pot from the heat and stir in the chopped parsley and scallions.
Serve over grits! 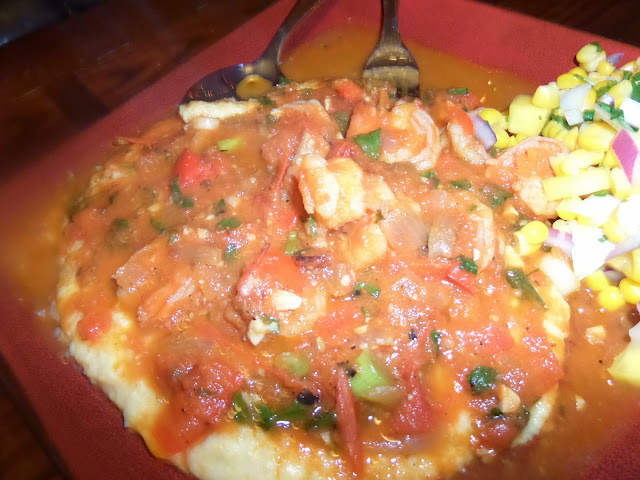 This stew takes some time--but it's fantastic. Enjoy!
Posted by Unknown at 9:23 AM