Penne ala Vodka with chicken

Whenever I visited my grandma in Long Island as a kid, we'd go to an Italian restaurant in a strip mall and this is what I'd order. That was an impressive restaurant: all the bread and butter you wanted! You got to shake the cheese on yourself (or until your grandma pinched you to stop). I  liked this because the sauce was pink. Now, I love it because it has bacon, cream and alcohol all together in one bowl of  goodness.
But this recipe is so good--it's cheap, delicious, decadent, and quick to make. This is the perfect meal to eat after a long day at work, while watching TV on the couch and having a well-deserved glass of wine. 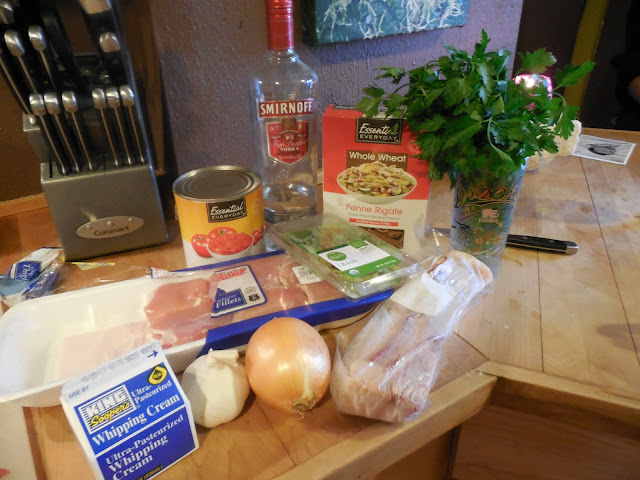 5 chicken thighs
4 strips bacon, sliced into small batons
1 head garlic, minced
1 yellow onion, chopped
1 large can (28 oz) tomatoes
1 cup vodka (no need to buy the good shit! Popov in the plastic bottle is FINE)
1 cup heavy cream
1 tsp red pepper flakes
Parmesan
Basil, chopped (how ever much you want)
Parsley, chopped (as much as you like)

What to do:
1. Crisp the bacon in a deep-enough pan (I used a braising pan. Use a sauce pan with sides at least an inch high) 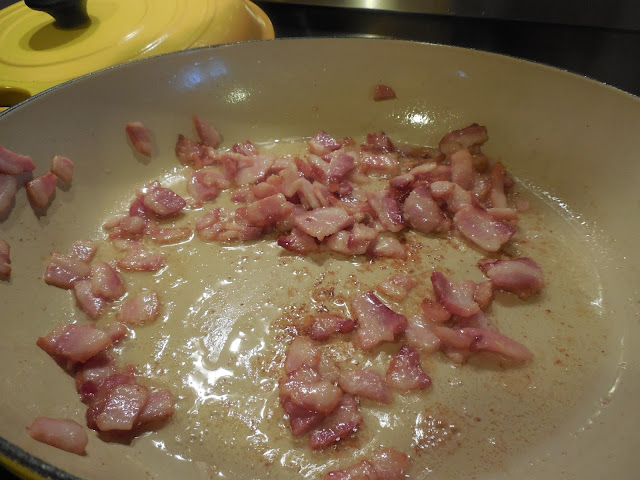 2. When the bacon is crispy, add the onion and garlic. Cook for about five minutes, or until just a bit colored. 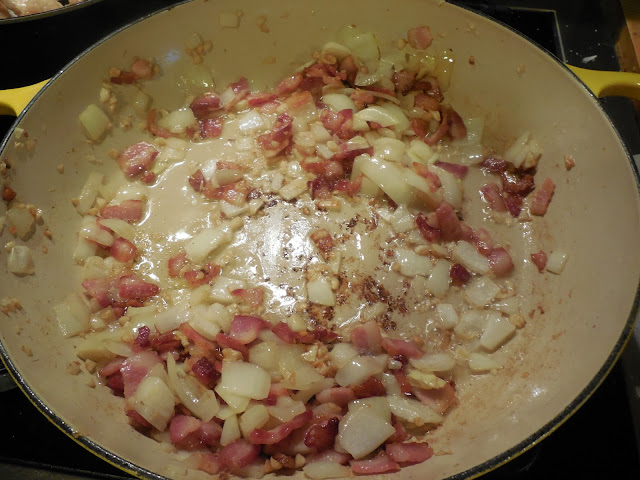 3. Meanwhile, at some point, cook the chicken thighs. Salt them, then cook them in a saucepan in some hot olive oil, about 4 min per side. 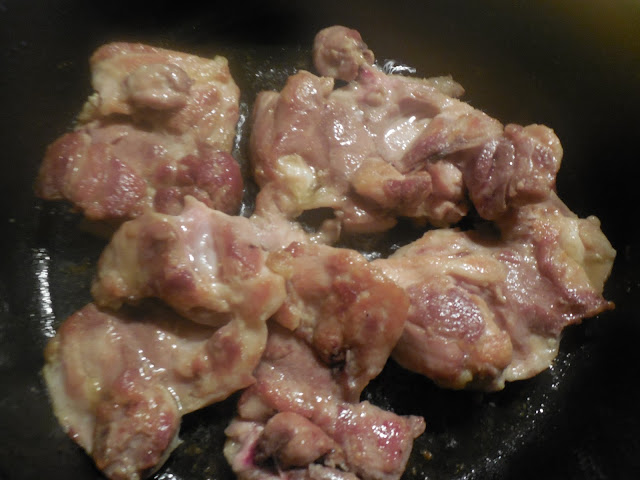 As you continue making the sauce, let these cool and they're done. You'll need to chop them, so they should be cool enough to touch.
4. Then, deglaze the pan with the vodka. When I was at this step, it burst into flames. So don't stir it over the edge and create a flame-path back into the pan. If it does catch on fire, put the pan's lid back on. This will not ruin the sauce, don't worry.
5. Add the tomatoes. Let it simmer for about 10 minutes. You want the tomatoes to break down a bit and for everything to meld. 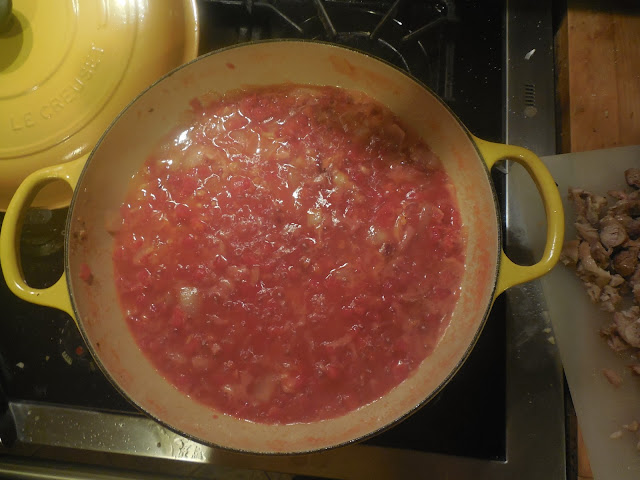 6. Chop the chicken thighs.
7. At some point, boil some penne. Stop when it's not quite done--you'll cook it in the sauce a bit more later.
8. Add the cream and chicken thighs to the sauce! 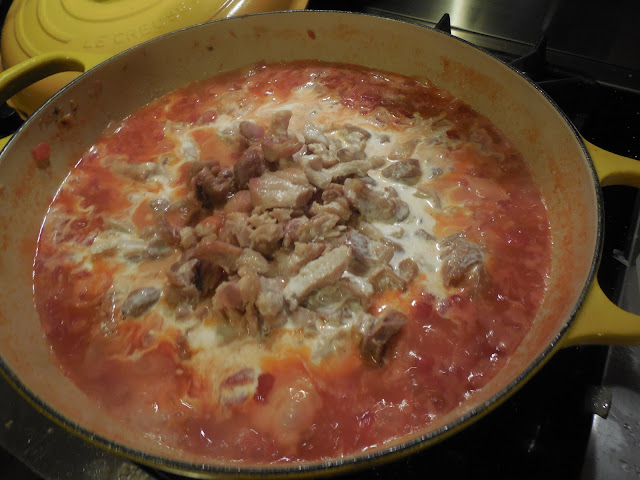 8. Mix it up and let it simmer. Add the red pepper flakes. I used a lot, and afterwards wished I'd used even more. 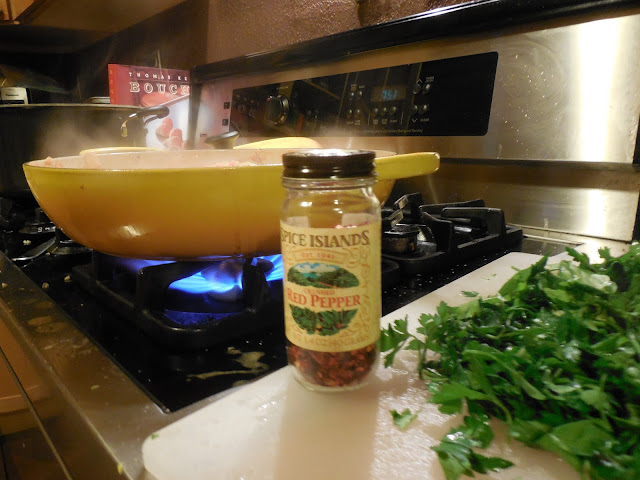 9. Drain the penne and put it in. Then, let it simmer for about 5 minutes. This will plump the pasta and fill the tubes with sauce. So when you bite, sauce squirts into your mouth.
10. After you turn the heat off, stir in the chopped parsley and basil. Save some to sprinkle on top.
11. Serve with an inappropriately large amount of parmesan and the leftover herbs! 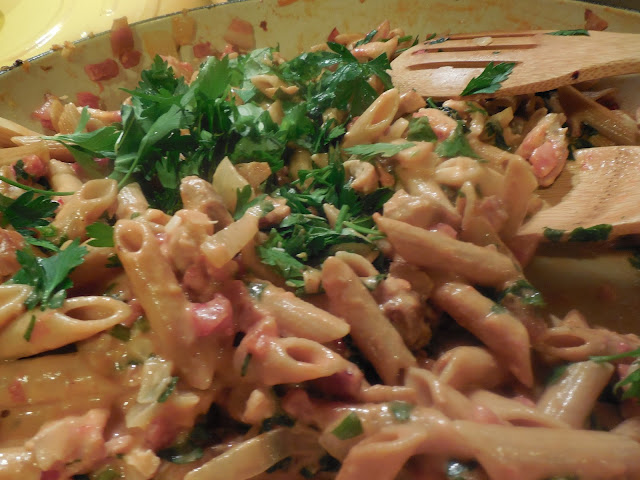 Those tubes are full of sauce. 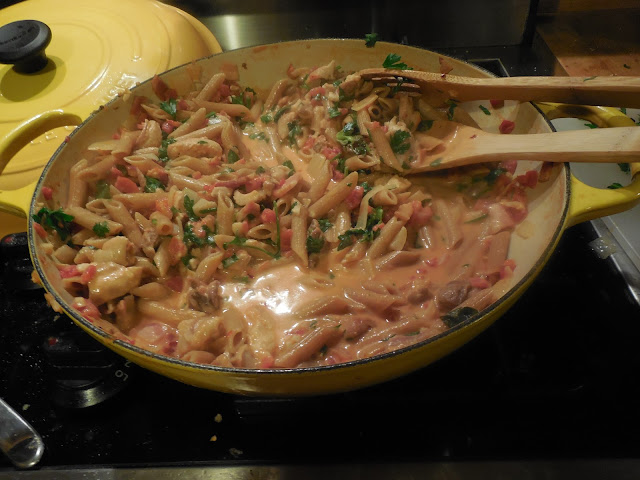